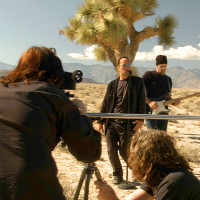 The short film I co-produced and co-directed with my bandmates in The Title Trackers was world-premiered by the LA Weekly Music blog this week.

The film serves as a music video for our song “Chopping Down The Joshua Tree,” a satiric take on what a title track would have sounded like on that seminal U2 album had they written one.

We shot the video near Death Valley at the site of the famous photos from that U2 album. It was a beautiful and powerful setting, and just an hour from Ridgecrest where we were playing our first festival gig in October. In fact, a shot from our show there is in the video as well.

The plaque featured toward the end of the video was created by our friend Ernie Navarre in 2003, and the LA Weekly also ran a story on him and his journey to find the legendary landmark. Read that article here, the article on our video here, and enjoy the film, posted below.